Continued from Chalking Up

Transitioning from no chalk to too much chalk and then finding the right amount...

Who sweats from their hands?  All climbers do!  For me, it's the feeling of nervousness and excitement all at the same time.  It's the thought of making the next difficult move, the crux.  It's from falling after committing and failing.  It's from watching other climbers on the wall.  I never had this feeling of sweaty palms when I first started climbing.  My attitude was like, "I don't sweat from my hands so I don't need chalk."  This changed when the routes had less jugs and I discovered slopers, climbing holds with flat or rounded surfaces, and small flat holds.  These climbing holds require friction. 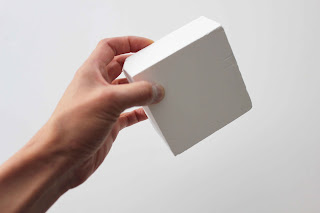 My first "project" in the gym had a climbing hold with a narrow flat surface at a slight negative incline.  The depth of the hold was about 2 inches, enough for half of my fingers to hold on to, and wide enough for both hands to hang on to.  I thought it was an impossible move at the time and laughed about it.  After watching another climber send it, the impossible became possible!  I attempted several tries and every time I slipped off, my palms would sweat.  My fingers felt greasy and I was greasing it on the hold.  No wonder why I kept slipping off.  Chalking up made a huge difference.  Instead of holding on for a nanosecond, I was holding on for a full second.  It sounds really silly but I only needed to match on the hold for less than 5 seconds to get pass and grab the next hold.  A little goes a long way.  After 2 weeks of trying with chalk, I sent the route!  From that moment on, I needed chalk and wanted my own chalk bag.

I also went through the period of over using chalk.  Too much chalk and not enough contact between skin and plastic can cause slipping.  I needed to find that happy medium and it took some time to figure it out.  It's always a good idea to brush off chalk that's been caked onto climbing holds.  I said "caked" on because of the combination of grease and chalk texture.  Some climbers carry a little brush like the size of a tooth brush to clean off holds.  Bouldering gyms have brushes attached to a long stick for hard to reach holds.  It's like brushing your teeth before bed, but brushing your holds before a climb.

Don't forget to chalk up before using a hang board too.  ;)

Lucy
I love designing, patterning, and creating things from scratch, whether it's a bag, a cover, or a piece of clothing. From start to finish, sketching out and brainstorming ideas are what drives me to keep on going. In sewing, the possibilities are endless! I have been sewing for over 10 years for my Etsy shop. Two and a half of those years, I had the pleasure to work at SLO Sail and Canvas designing custom covers for sail boats, racing boats, power boats, pontoons, catamarans, and more. In 2020, I made a bold move and decided to leave my full time job during the pandemic to focus solely on my small business. Shout out to my boyfriend, Dusty, who is super supportive of my decision. I couldn't be doing this without him. Thank you! I make what I love. My favorite hobbies definitely shine through in my shop from rock climbing to fire spinning to sewing to jewelry making. Everything in my shop is made with care by me and hand crafted with love. I am a one person shop owner and maker. All Beta Etsy shop was active from 2011 to 2020 is now rebranded to Beta Crush starting the year 2021. Thanks for checking out my page!